John Morel is considered to be one of the best Master Craftsmen in Canada. He has been designing and sculpting raw wood and other materials into heirloom quality furniture for over forty four years. John brings a unique perspective to furniture making and likes to incorporate metal, stone and shell into some of his pieces.

His furniture with its curved lines, use of inlay and exquisite craftsmanship has made his work extremely popular among those seeking an unparalleled piece of functional art. Born in Hampshire-England, John was raised where his father, a woodworker, introduced him to the mysteries of woodworking. It was there John found his passion for creating, designing and building.

At the age of fifteen John apprenticed as a blacksmith and by the age of twenty one became a Master Blacksmith. During this time he also studied silversmithing at the Vittoria College of Art in Birmingham and lettering at Worcester College of Art in Worcestershire. He emigrated to Canada in 1964 where he worked as a blacksmith and Journeyman machinist.

In 1976 he decided it was time to pursue his true passion and he began what has gone on to become a successful and fulfilling career as “The Furniture Maker”. John is a multi-award winning designer and builder and his works have been featured in numerous industry magazines and publications.

He has given unselfishly much of his time to helping others pursue their dreams of become woodworkers and has tutored and mentored many over the years.

He describes his work as a creative process. He listens carefully to his customers and helps them develop a sense of what they’d like to have. John believes like any good relationship, creating custom furniture requires good communication and trust between himself and his customers.

“There’s nothing quick or cheap about custom furniture, it requires an investment. But the finished product is worth it.” – John Morel

“The creative process brings sense and purpose to my life.” – John Morel 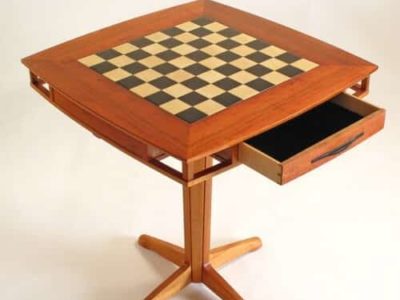